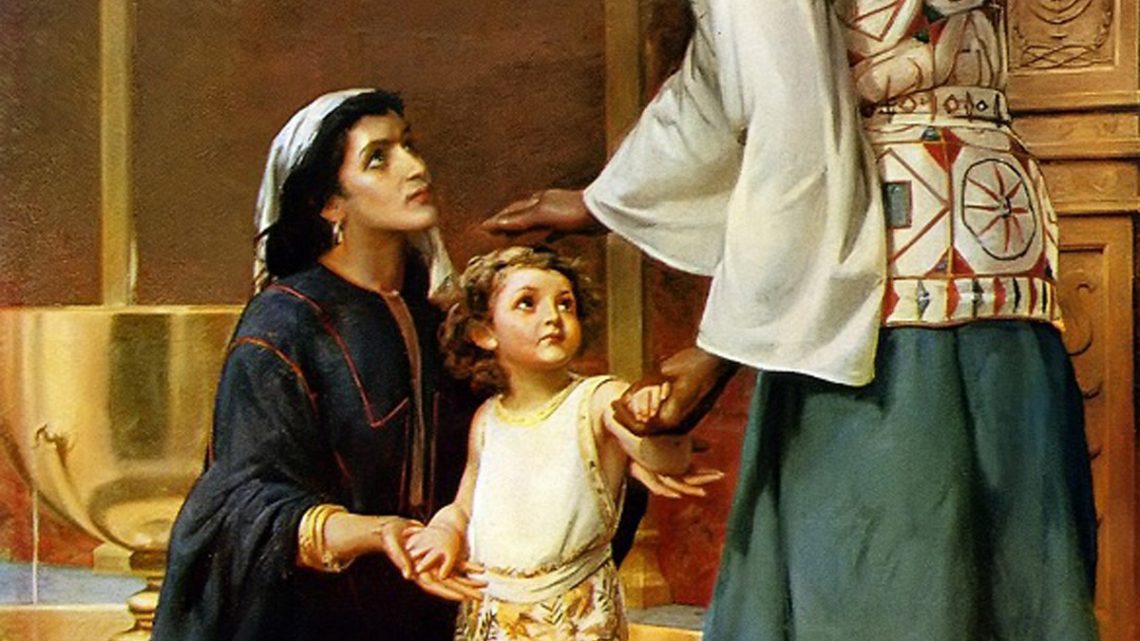 The story of Hannah is found in 1 Samuel 1:2 – 2:21 in which an infertile woman struggles to find self-worth. Yet through faith in God, she becomes the mother of Samuel the prophet, who would anoint Israel’s first king, Saul, and Israel’s greatest king, David. Hannah’s husband Elkanah, had two wives: Hannah and Peninnah. Peninnah had children, but Hannah had none, and yet Elkanah preferred Hannah. Hannah’s status as primary wife and her infertility parallel Sarah and Rebecca in Genesis chapters 17 and 25 respectively.

In this painting by the Victorian artist, Frank W.W. Topham, we see Hannah offering Samuel to Eli in the sanctuary at Shiloh in Samaria. This moment is the extraordinary act of self-sacrifice that Hannah makes to God in answering her long awaited prayer. If she were to bear a son, she would give him back to God to serve in the temple all the days of his life. This scene is striking for its sumptuous colours, in the use of gold and bronze furnishings and the clothes that Eli and Samuel are wearing compared with Hannah’s dark, long dress. Topham employs a Middle Eastern style here to show both Hannah and Eli in traditional outfits and with accurate features, yet Samuel’s young face couldn’t be more English!

Eli is wearing the liturgical clothes detailed in Exodus 28: 5-14 where it describes the ephod – a waistcoat type vestment, made of linen with gold, blue, purple and scarlet decorations, supported by a girdle and bejewelled shoulder pieces. Underneath we can see the woollen robe which had to be blue according to the sacred stipulations (but has presumably faded to green in this painting). It contained a hem attached with woollen pomegranates and gold bells. The bells were an important mobile alarm system for the High Priest so that he would be heard and not killed when in the Holy Place of the temple or shrine.

The Exodus account of the sanctuary’s contents is found in Exodus 28 and Exodus chapters 36-40 and our artist has clearly included some of its elements in this painting. The bronze basin that we see behind Hannah is for the priests to wash their hands and feet before approaching the altar with food offerings. The decorations on the right hand brick pillar supporting the woven linen curtains show a Menorah (seven branched candlestick) and a flowering plant from the account of the building of the Jerusalem Temple in 1 Kings 6:29.

Every year, Elkanah would offer a sacrifice at the Shiloh sanctuary. While he gave Peninnah and her children a portion, he always gave Hannah a double portion ‘because he loved her, though the Lord had closed her womb’. (1 Samuel 1:5). One day Hannah went up to the sanctuary praying and weeping as she was ‘a woman of sorrowful spirit’ and was sick of her rival Peninnah’s taunts at her barren state. Eli the High Priest was sitting on a chair near the entrance and he presumed she was drunk as her words were so quiet. The value of women was enhanced greatly by their childbearing capacities so the story takes up her pain, names it as personal failure and then draws it out in a communal context. The desperation of Hannah’s promise to return her son back to God as a Nazirite, even though the Torah states that the commitment could be temporary (Numbers 6:1-21), indicates that merely bearing a male child would establish her in the community.

Eli, surprisingly undiscerning as a High Priest, nevertheless listens to her plea, blesses her and sends her home. So Hannah conceived at last and bore a son, called Samuel, which means ‘heard by God’ – ‘since she had asked the Lord for him’ (1 Samuel 1:20). The role of women giving names in pre-Monarchic Israel implies a semi-authoritative social role, at least within the family. Hannah then raised him until he was weaned and brought him to the temple along with a sacrifice which is what we see in this picture.

Hannah is considered to be a prophetess in her song of thanksgiving (1 Samuel 2:1–10) because she recognises that her own individual experience contains a greater significance for the whole course of the Kingdom of God. Key themes from her song are picked up and echoed in Mary’s own Song, the Magnificat in Luke 1: 46-55, where there is a striking resemblance in ideas and tone more than in the actual language. We notice a fine balance between Hannah’s honest presentation of her circumstances coupled with God’s power to redeem his faithless people and their purpose. Hannah’s faith and prayer not only grant her the desired wish she had long sought, but Eli blesses her again. Hannah conceived 3 more sons and 2 daughters, so that her original offering becomes the gift of six children in total.

By the time we see Hannah handing over Samuel to Eli right here, she models a number of qualities. Hannah represents a devout and persistent petitioner, grateful celebrant of divine glory and a keeper of promises. In the book of Leviticus, provisions were made for redeeming vows or pledges in money that would go to the upkeep of the priests and the sanctuary. Therefore, Hannah could have chosen another option to fulfil her promise. On further reflection, and once she had born and bonded with her son, she might have felt unable to part with him. Yet Hannah remained consistent and true to God, and in this way, God graced her even more. Hannah’s face is both determined and committed in this interpretation of her personality. Topham has caught the moment in which, through Eli, God blesses Hannah as Eli’s hand hovers over Samuel to bless him in his future role; and Hannah realises her vocation in life. Understandably, she kneels in this act of sacrifice and gift to and from God. Hannah later becomes an important figure for the Christian tradition of private prayer.

The last significant aspect in this painting is Samuel’s mini ephod. His smaller but equally elaborate ephod connects him to Eli – under whose care he is, and signifies his future purpose as prophet in Israel. We are told in 1 Samuel 2:19 that Hannah would make a new ephod for him every year when she visited him in the sanctuary. Here we can imagine that as Samuel grew bigger, and Hannah sews larger robes for him, so his calling also grew. God anointed him to lead his people in unstable times and Samuel becomes the last of the great prophets before the rise of the monarchy. In the Bible, clothes and their imagery often symbolise the spiritual life (cf. Isaiah 61:10; Colossians 3:8-16; and 1 Peter 5:5). Samuel grows physically and spiritually, sustained and nurtured by Hannah’s lifelong faith and devotion to the Lord.

“My heart exults in the Lord;
my strength is exalted in my God.
My mouth derides my enemies,
because I rejoice in my victory.
2 “There is no Holy One like the Lord,
no one besides you;
there is no Rock like our God.
3 Talk no more so very proudly,
let not arrogance come from your mouth;
for the Lord is a God of knowledge,
and by him actions are weighed.
4 The bows of the mighty are broken,
but the feeble gird on strength.
5 Those who were full have hired themselves out for bread,
but those who were hungry are fat with spoil.
The barren has borne seven,
but she who has many children is forlorn.
6 The Lord kills and brings to life;
he brings down to Sheol and raises up.
7 The Lord makes poor and makes rich;
he brings low, he also exalts.
8 He raises up the poor from the dust;
he lifts the needy from the ash heap,
to make them sit with princes
and inherit a seat of honor.
For the pillars of the earth are the Lord’s,
and on them he has set the world.
9 “He will guard the feet of his faithful ones,
but the wicked shall be cut off in darkness;
for not by might does one prevail.
10 The Lord! His adversaries shall be shattered;
the Most High will thunder in heaven.
The Lord will judge the ends of the earth;
he will give strength to his king,
and exalt the power of his anointed.”

Further Reading:
Women of the Old Testament: Their Lives, Our Hope by Pia Septien. Liguori Publishers. 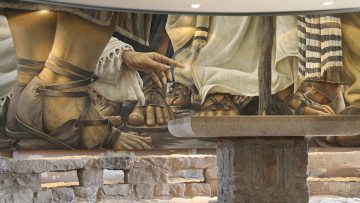 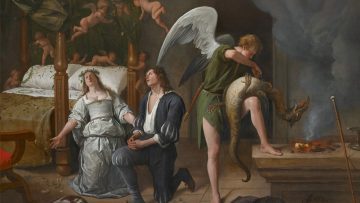 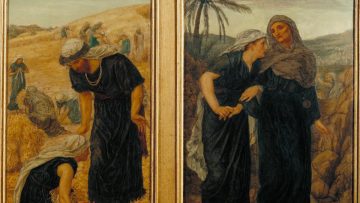 Fleur reflects on the story of Ruth through the lens of British watercolourist Thomas Matthews Rooke. 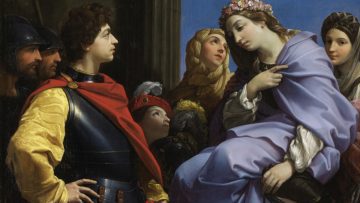