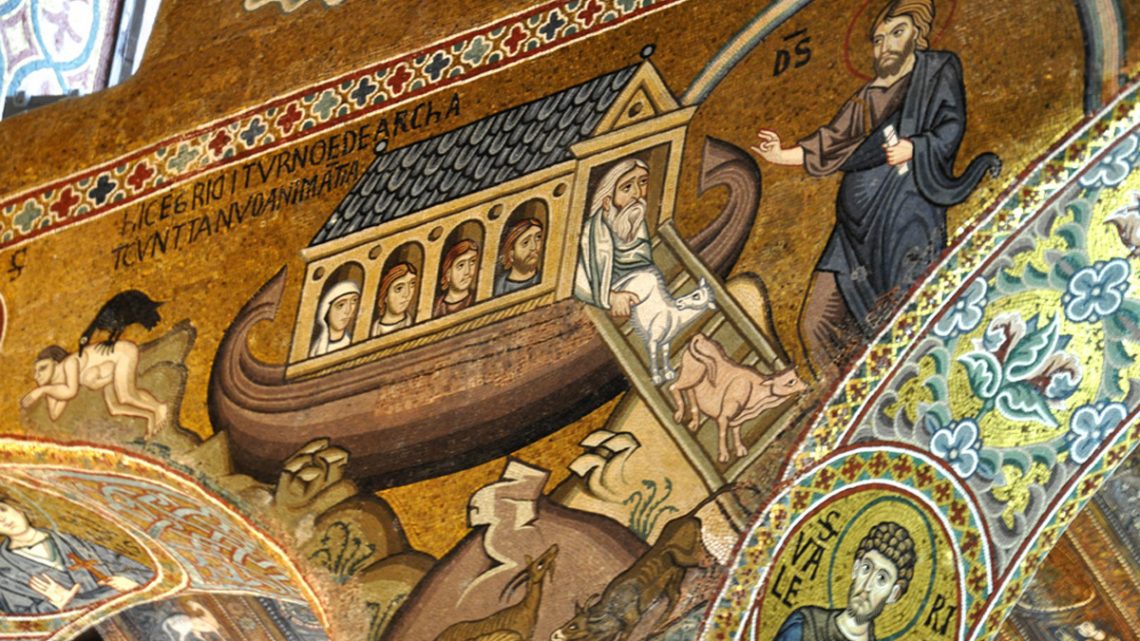 Noah and his Ark are one of the most famous images from the scriptures, and the story of the flood and the animals going in two by two, are one of the earliest bible stories we hear in school. But we hear much more of God and God’s feelings in the story than of Noah’s. Chapter 6 of Genesis speaks of a fallen world where the evil heart of humanity grieves the heart of the Creator. Noah enters as righteous and blameless, capable of walking with God and so brings new possibility. Noah is the new human, a type of the ‘one to come’:
“..if anyone is in Christ, he is a new creation, the old has passed away, behold the new has come.” (2 Corinthians 5:17). Noah accepts his creaturely state by allowing God to be God – “He…did all that God commanded him” (Genesis 6:22). For Noah, God’s commands are not rules but words of life. Yet for all Noah’s virtue there is no sudden change in humanity, the change is in the heart of God.

The focus of our story is not so much the dramatic setting of the flood, but the heart of God in crisis. This is not the unchanging God of classical philosophy – One, Good, True and Beautiful. Hosea will express this well in relation to exile “I will not execute my fierce anger, I will not again destroy Ephraim, for I am God not man…” in Hosea 11:8-9. The conflict Hosea expresses between righteous judgement and divine pathos in 11:1-9 is being worked out in the Flood story.

From the beginning of Genesis, God’s commitment to Creation has proved costly, with betrayal and consequent profound grief, but God does not stand aloof as a neutral judge, rather God enters into the mess. This depth of divine grief and the self-abandoning of God in re-commitment to the creation is unique. There is no equivalent among the stories of the Gods of the ancient world and it will become a focus in the early Church for the unique ministry of Jesus in Philippians 2:5-11:

“…who though he was in the form of God, did not count equality with God a thing to be grasped, but emptied himself, taking the form of a servant, being born in the likeness of men….”

In Noah, humanity is called again to be image of God (Genesis 9:1-6); and the sanctity and worth of every human life is established with a solemn forbidding of the shedding of human blood. But in the end what has changed is not the earth or the human imagination, but the heart i.e. in the ancient world, the seat of the mind, of God. The relationship with Creation is now one of total gratuitousness. The bow in the sky is the divine weapon of anger permanently at rest.

Just as the first creation, ended with the divine Sabbath rest of God, so the re-creation ends, with the peace of God beyond all human provocation. This happens because God “remembered” Noah and made a commitment to him in compassion. As soon as God remembers Noah in the text, the waters start to subside, until in Genesis 8:8-18 Noah and his creatures enter a new and free land. So a renewed Creation and a renewed Exodus! God’s mind has moved from righteous judgement to promise, through commitment to Noah, the new man. Not surprising then that Noah should come to be seen as a type of Jesus to come.

God is merciful and cannot destroy what is good. The text emphasises: “Noah was a just man, blameless among the men of his day. He walked with God.” The words evoke the memory of Adam and Eve, before the fall, who walked companionably with God in the garden, in the cool of the evening.

Many ancient civilisations of the Near East have a folk memory of a terrible flood which in some ancient past covered the known world, i.e. their world. It is this shared folk memory which the inspired author is drawing on. He uses it to further reveal the nature of the creator God’s involvement with the unfolding creation, and the emerging people of God.

The God of the Hebrews is unique in this world. The Gods of ancient Egypt and Mesopotamia ruled by caprice and had to be humoured to limit their excesses and to renew the annual cycle of life. But Yahweh is a moral God who had revealed the ten words of life, the commandments, so that humans might live fully and fruitfully with each other and care for the frail in their midst. This just God is merciful and will not condemn the just.

The ancient world found its identity in the collective, in the people, the state, or the king. The author is revealing something new in this world – personal responsibility. Genesis speaks of how a just person, Noah, can rise up among an evil generation and walk blameless with a loving God.

The teachings continue to emerge. The ark is vast – 450 feet long, 75 feet wide and 45 feet high! The word ark is tebah in Hebrew. It only appears one other time in Exodus 2:3-5 used of the, also pitch coated, basket/tebah of the baby Moses! Both of these ”Arks” are symbols of God’s protection which is clearly why the early Christians used them so often in the Catacombs as a symbol of the Church, the community of salvation.

The story of the flood which follows, told from two different perspectives with two different timescales, remains clearly a parable of God’s justice and mercy. In all the other great flood stories of the ancient world there is no equivalent to this religious core.

God’s words to Noah are those of a new Creation echoing and renewing the first: “Be fruitful and multiply and fill the whole earth.” God’s merciful love is creative of new possibilities something that will become clearer in the life and teaching, dying and rising of Jesus.

But there are consequences to this patient mercy. The earth is “subject” to humans “in fear” and this will have repercussions. This is not the original vision of the peaceful kingdom of the first creation account with a vegetarian Adam and Eve enjoying the peace and harmony of God’s paradise in solidarity with all other living things. Yet the Prophets will keep that original vision open in their predictions of a fully redeemed world in the future. Isaiah 54:7-10  deliberately recalls Noah, the flood and the covenant:

“For this is like the days of Noah to me, as I swore that the waters of Noah should no more go over the earth so I have sworn that I will not be angry with you and will not rebuke you. For the mountains may depart and the hills be removed, but my steadfast love shall not depart from you and my covenant of peace shall not be removed, says the Lord, who has compassion on you”.

Looking to the bow in the sky, and perhaps thinking of the great war bow, Isaiah calls the “everlasting covenant” (Genesis 9:16) the “covenant of peace.”

So the destruction of the flood ends and humanity has a new opportunity to build again with God, in a new age. And the sign of God’s merciful commitment to this new arrangement with humanity is the rainbow in the sky. From then on humans seeing it after rain will be reminded of the human sin that led to the flood and the divine mercy that is God’s promise of redemption and not destruction. The chapters that follow will show how humanity continues to abuse God’s mercy, but how the faithful loving kindness of God continues to raise up men and women of faith. They will prepare the way for a people who will be a sign that an alternative life is possible.

In the wonderful story of Jonah there is a clear evocation of Noah in the story of the storm and the great flood, and in the great fish in which Jonah is carried to salvation. But for the moment, in the Hebrew Scriptures the animals are sadly given to humans for their food.

In the Christian Scriptures Noah appears but with different emphases. At the end of Matthew’s Gospel, Jesus compares the coming of the Son of Man unexpectedly with the flood that found sinners disconcerted by its sudden appearance. The Son of Man, like Noah, will usher in a new age when it is least expected.

This is already hinted at in the opening chapters of the Gospel where the Holy Family’s flight to Egypt (Matthew 2:19-23) parallels Noah’s flood in Genesis (Genesis. 6:1ff) and Moses crossing the Nile (Exodus 2:1-10), with salvation in the ark and the cradle paralleling Jesus bringing salvation through his Baptism in the River Jordan and his affirmation by the Father. There Jesus rises from the waters of salvation to be met by the dove evocative of the Flood and Noah. (See Matthew 3:16ff.).

1 Peter 3:20 has Jesus preaching to the dead including those of the time of Noah, and Baptism is seen as a fulfilment of the waters of salvation of the Flood. The author again in 2 Peter 2:5-6 refers to Noah and Lot as righteous ones who God affirms in the midst of evil doers.

Hebrews 11:7 gives a list of the righteous whose faith stands as “the assurance of things hoped for, the conviction of things not seen.” And Noah is celebrated as such a one for his obedience in building the ark and so preserving the possibility of righteousness into a new future. He is the means of God’s faithful mercy being effective beyond the fall and the wickedness of the human heart. The divine intention in Creation is not totally frustrated but through a remnant the kingdom of God becomes possible. In this, Noah becomes a type of Mary and Joseph, and Elizabeth, and Anna and Simeon; the anawhim or poor of God. They wait faithfully for the coming of the Messiah and respond with faith and joy to his presence.

David McLoughlin is the Emeritus Fellow of Christian Theology at Newman University, Birmingham and sits on the God who Speaks National Planning Team. 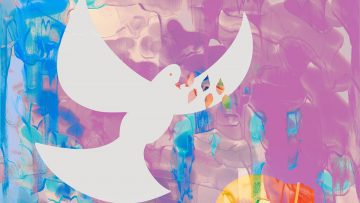 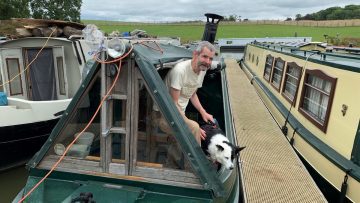 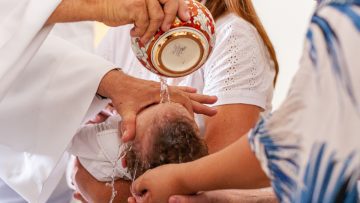 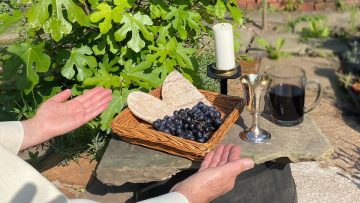