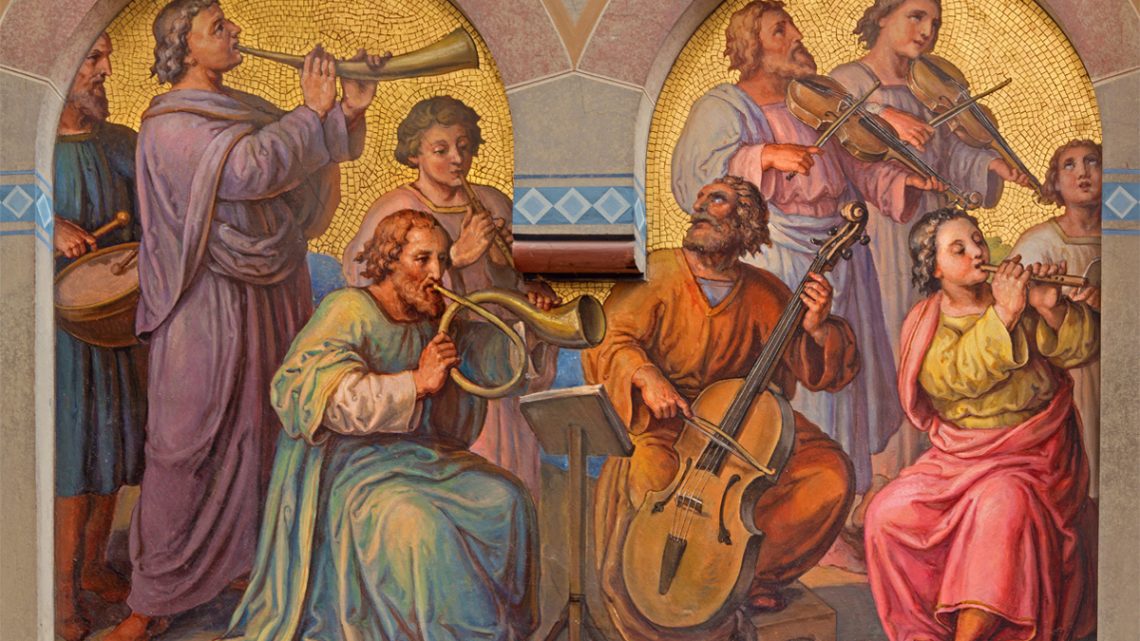 The shofar is a horn, traditionally of either a ram or goat. It wasn’t used to play music but to sound a signal through a series of long and short blasts.

It is mentioned in several places in the Bible, often within the context of battles. Sometimes translators have chosen to describe it as a trumpet or as a ram’s horn instead of using the direct translation of shofar.

Here’s a good example from the book of Joshua, when the Israelites advanced into the promised land of Canaan:

‘Then the Lord said to Joshua, ‘See, I have delivered Jericho into your hands, along with its king and its fighting men. March round the city once with all the armed men. Do this for six days. Make seven priests carry trumpets of rams’ horns in front of the ark. On the seventh day, march round the city seven times, with the priests blowing the trumpets. When you hear them sound a long blast on the trumpets, make the whole army give a loud shout; then the wall of the city will collapse and the army will go up, everyone straight in.’ (Joshua 6:2-5, NIV)

Tambourines are mentioned a few times in Scripture, most notably when Miriam played one to celebrate the Israelite’s Exodus from Egypt. They are great for spontaneous parties! The tambourine is held in one hand and hit with the other, which means you can play and dance at the same time.

‘Then Miriam the prophetess, the sister of Aaron, took a tambourine in her hand, and all the women went out after her with tambourines and dancing.’  (Exodus 15:20, ESV)

The cymbals mentioned in the Old Testament likely refer to the small cymbals on clappers (modern day castanets) and the finger cymbals seen in Middle Eastern dance. These instruments were used in noisy celebrations!

‘And David and all the house of Israel were celebrating before the LORD, with songs and lyres and harps and tambourines and castanets and cymbals.’  (2 Samuel 6:5, ESV)

Cymbals are also mentioned in the New Testament, again with reference to being noisy, this time in a negative way:

‘If I speak in the tongues of men and of angels, but have not love, I am a noisy gong or a clanging cymbal.’ (1 Corinthians 13:1, ESV)

The book of Exodus states that bells of gold were sewn into the hem of Aaron’s priestly robe. These weren’t meant to be musical but instead a warning signal as the priest entered or left the Holy of Holies in the Tabernacle – where the Ark of the Covenant was kept.

The Old Testament describes the priests using silver trumpets (crafted from a solid piece of beaten silver) to gather the Israelites together and to signal the breaking of camp. Again, these trumpets, like the shofar, didn’t have any pitch-altering devices and so the signals were given through a series of long and short blasts.

‘The LORD spoke to Moses, saying, “Make two silver trumpets. Of hammered work you shall make them, and you shall use them for summoning the congregation and for breaking camp.”‘ (Numbers 10:1-2, ESV).

Trumpets are also mentioned in the New Testament, most notably in Revelation:

‘Then the seventh angel blew his trumpet, and there were loud voices in heaven, saying, “The kingdom of the world has become the kingdom of our Lord and of his Christ, and he shall reign for ever and ever.” And the twenty-four elders who sit on their thrones before God fell on their faces and worshipped God.’ (Revelation 11:15-16)

While it hasn’t been traditionally considered an instrument, our vocal chords can create a wide range of pitches, tones and percussion noises. There are loads of Bible verses to choose from when it comes to singing, here are two great ones:

‘About midnight Paul and Silas were praying and singing hymns to God, and the prisoners were listening to them, and suddenly there was a great earthquake, so that the foundations of the prison were shaken. And immediately all the doors were opened, and everyone’s bonds were unfastened.’ (Acts 16:25-26, ESV)

Reed-Pipes were a type of woodwind instrument that were often used in celebrations.

‘There Zadok the priest took the horn of oil from the tent and anointed Solomon. Then they blew the trumpet, and all the people said, “Long live King Solomon!” And all the people went up after him, playing on pipes, and rejoicing with great joy, so that the earth was split by their noise.’ (1 Kings 1:39-40, ESV)

A lyre is an ancient stringed instrument with at least seven or eight strings. It was played to accompany singers and is mentioned many times in the Old Testament.

‘Sing praises to the LORD with the lyre,
with the lyre and the sound of melody!‘ (Psalm 98:5, ESV)

David, when he was a boy, famously played the lyre for King Saul and it refreshed him and made him well. You can read the story in 1 Samuel 16:14-23.

Similar to the Lyre but larger and with more strings, the harp was also played to support singers.

‘And they carried the ark of God on a new cart, from the house of Abinadab, and Uzzah and Ahio were driving the cart. And David and all Israel were celebrating before God with all their might, with song and lyres and harps and tambourines and cymbals and trumpets.‘ (1 Chronicles 13:7-8, ESV)

Flutes are another woodwind instrument, similar to the reed-pipe, that are mentioned in the Bible. Their emotive sound means they were often used at funerals.

The flute players were waiting, ready to mourn, at the house of the little girl whom Jesus healed in Matthew’s Gospel:

‘And when Jesus came to the ruler’s house and saw the flute players and the crowd making a commotion, he said, “Go away, for the girl is not dead but sleeping.” And they laughed at him. But when the crowd had been put outside, he went in and took her by the hand, and the girl arose. And the report of this went through all that district.’ (Matthew 9:23-26)