Beyond the Cloud: The Ascension of Christ

Fleur Dorrell explores Christ’s Ascension beyond the Cloud. Why did Jesus need to ascend and what can Scripture show us about this extraordinary event? 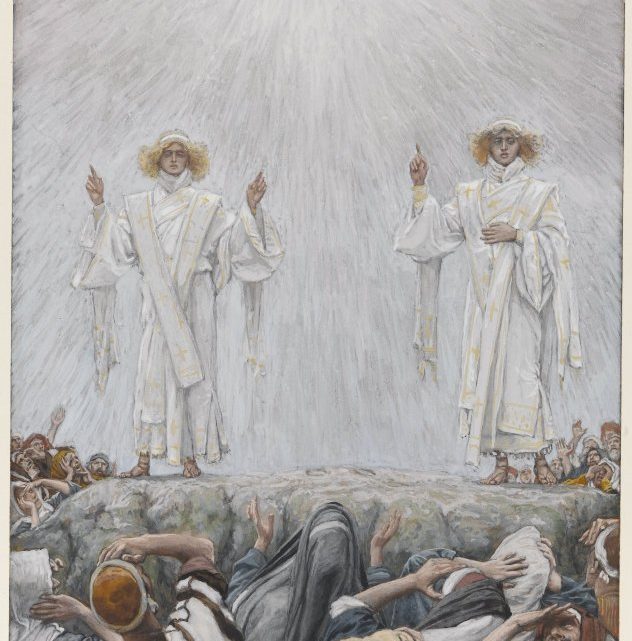  icon-home » Saints & Seasons » Ascension » Beyond the Cloud: The Ascension of ...

Beyond the Cloud: The Ascension of Christ

Ascension Day is one of the great solemnities in the Christian liturgical calendar, and commemorates the bodily ascension of Jesus into heaven. Ascension Day is traditionally celebrated on a Thursday, and on the 40th day after Jesus’ resurrection on Easter Sunday.

This year Ascension Day is celebrated on Thursday 26th May.

The Ascension in Scripture
The details of Jesus’ ascension described in Mark 16.19, Luke 24.50-53 and the Acts of the Apostles 1.8-11 are brief but Jesus also refers to his ascension in John 20.17 when he appears to Mary Magdalene. She searches for the risen Jesus in and around his tomb and he asks her not to touch him because he has not yet ascended.

19 So then the Lord Jesus, after he had spoken to them, was taken up into heaven and sat down at the right hand of God.

Luke 24.50-53
50 Then he led them out as far as Bethany, and, lifting up his hands, he blessed them. 51 While he was blessing them, he withdrew from them and was carried up into heaven. 52 And they worshipped him, and returned to Jerusalem with great joy; 53 and they were continually in the temple blessing God.

17 “Do not hold on to me, because I have not yet ascended to the Father. But go to my brothers and say to them, ‘I am ascending to my Father and your Father, to my God and your God.’”

8 But you will receive power when the Holy Spirit has come upon you; and you will be my witnesses in Jerusalem, in all Judea and Samaria, and to the ends of the earth.” 9 When he had said this, as they were watching, he was lifted up, and a cloud took him out of their sight. 10 While he was going and they were gazing up toward heaven, suddenly two men in white robes stood by them. 11 They said, “Men of Galilee, why do you stand looking up toward heaven? This Jesus, who has been taken up from you into heaven, will come in the same way as you saw him go into heaven.”

The Context and Meaning of Christ’s Ascension

Before his ascension, Christ spent 40 days teaching the apostles and disciples about the Kingdom of God (Acts 1.3). The Lord encouraged them by saying that they would receive power from the Holy Spirit to be his witnesses to the ends of the earth (Acts 1.8).

The Ascension occurred at Bethany on the Mount of Olives mentioned in Luke 19.29. Jesus had travelled through Bethany on his way to Jerusalem. It was where he asked his disciples to find a colt for him to ride, and, from then on, the crowds greeted Jesus by waving palms and rejoicing at his entry into Jerusalem (our Palm Sunday Gospel reading).

Christ’s work of redemption is called the Paschal Mystery of Christ. It is fulfilled in his passion, death, resurrection, and glorious ascension into Heaven. This Paschal Mystery constitutes one action for the salvation of the world since Jesus “was handed over to death for our trespasses and was raised for our justification.” (Romans 4.25).

Jesus’ ascension also signified the completion of his time on earth, celebrated 10 days before the Feast of Pentecost – the coming of the Holy Spirit. Christ was already preparing his disciples for his departure by promising them real hope when he said:
“3And if I go and prepare a place for you, I will come again and will take you to myself, so that where I am, there you may be also.” (John 14.3).

The Ascension – the destiny of a new humanity

According to Luke, when Jesus was lifted up, a cloud took him out of their sight (Acts 1.9).
In this text, we see two key visible things:
a) “he was lifted up” (elevation and praise)

b) “a cloud took him” (entrance into the divine mystery).

Jesus is physically lifted up from earth to heaven, it is a sign of another journey that Christ needs to make in order to arrive in heaven in his glorified state in God. The meaning of the ascension is, therefore, that of a revelation that the risen one has been transported into heavenly intimacy of God. This is shown by “the cloud,” a well-known Old Testament biblical sign of the divine presence. So Christ disappears from the eyes of his disciples by entering the transcendent realm of the invisible God.

This is intrinsic to the mystery of Christ’s purpose in ascending when he says of himself:
28”I came from the Father and have come into the world; again, I am leaving the world and am going to the Father.”(John 16.28).

The Angels offer sound theological advice in recommending the disciples not to stare into the heavens as they watch Jesus ascend, but rather to prepare for the glorious return of the risen one. This has remained the role of the Church ever since. It seeks to creatively hold the ground between the visible and invisible, the already and the not-yet, between the present partial reality and the future city to which we all aspire, but are still journeying towards.

Humanity in the presence of God

The words of the Apostles’ Creed: “he rose, ascended into heaven and is seated at the right hand of the Father…” state succinctly our Easter faith in Jesus of Nazareth. This man, who his disciples had “eaten and drunk with” in his everyday life, has since his death “become Lord”. God the Father has drawn Christ’s human life into the centre of the Creator’s relationship with humanity and creation. As Matthew’s Gospel has the risen Jesus say: “Every power in heaven and on earth has been given me.”

In the Acts of the Apostles, Jesus now alive beyond death and present to the disciples, moves into a new form of presence, and journeys with them on the roads of life. Here they are to be witnesses to his resurrection, become proclaimers of the forgiveness of sins and of the new life offered to all the children of God. They now share and bear the power of the Spirit which radiates from members of all the nations being called into one universal community. A community, entered by faith and baptism, where each member refracts new dimensions of the risen Christ. And where each believer seeks the things beyond, where Christ is seated at the right hand of the Father (Colossians 3:1). Here each person already participates in the Cosmic Christ’s body “in the immeasurable greatness of his power in us who believe,” (Ephesians 1:16-23).

Pope St. Leo the Great (c.400-461 CE) expresses the enthusiasm of the early Christian community in the significance of the Ascension in two sermons (Sermons 73 & 74). He sees the glorious ascension of Christ as an invitation for the whole community. An invitation to hope joyfully in the possession of paradise, but also to journey to the heights of heaven in the company of the risen Christ.

Instead of thinking of heaven as a place of eternal happiness, somewhere beyond the stars and beyond the sufferings of this life, we are offered heaven as Someone! In Christ, heaven is the full participation of a truly human life in the life of God, a life of matter and history which we can all identify with and share. But a life which now, free from all the limits of time and space, and of daily brokenness, reveals a new transparency between Creator and creature. So we can hope for a time when we will truly express what we already are, the sons and daughters of God, in perfect communication with God in Christ.

Nor is this heaven simply a “reward” for a just and good life. It is Paul who points out “the sufferings of this present time are not worth comparing with the glory that is to be revealed in us. For the creation waits with eager longing for the revealing of the children of God…” (Romans 8:18-19). The eastern Christian Churches celebrate this theme, in their icons of the saints and in their theology of the Christian life, as moving “from glory to glory” (Gregory of Nyssa c.335-394 CE). They journey ever deeper into the mystery of God which their lives then increasingly manifest.

Nor is this heaven the narcotic for the passive and the resigned; the grounds for a lack of commitment to working in this world for the realisation, however imperfectly, of the values of freedom, justice, peace, solidarity, communion, love, and joy. Rather these are the very signs of the blessedness of human life according to revelation itself. It is precisely a community which travels in these directions, open to the world and at the service of all that becomes the sign of the new humanity already realised in Jesus Christ.

The commitment of believers to everyday life

“… among the forms of modern atheism is that which anticipates the liberation of man especially through his economic and social emancipation. This form argues that by its nature religion thwarts this liberation by arousing man’s hope for a deceptive future life, thereby diverting him from the constructing of the earthly city. (GS 20)

But then unpacks the relationship implicit in the Ascension of Christ:

“Therefore, while we are warned that it profits a man nothing if he gain the whole world and lose himself,(22) the expectation of a new earth must not weaken but rather stimulate our concern for cultivating this one. For here grows the body of a new human family, a body which even now is able to give some kind of foreshadowing of the new age. Hence, while earthly progress must be carefully distinguished from the growth of Christ’s kingdom, to the extent that the former can contribute to the better ordering of human society, it is of vital concern to the Kingdom of God.(23)” (GS 39: cf. also GS 43 & 57).

In all of this, Pope Leo (Sermon 74, 2 SC 74:140) had anticipated the modern approaches of theologians like Rahner and Schillebeeckx to the Church and Sacraments. Christ’s departure made possible the Spirit at work through the Sacraments, to extend symbolically Christ’s glorified body and presence throughout the world. Simple contact with a Christ still present in bodily form on earth would be limited by the conditions of space and time. Now Christ is present and available in every place and at all times through signs made effective by his Spirit.

The incarnation of the Word had made it possible to encounter God and so changed history. The Ascension of the risen Christ and the sending of the Spirit, allow all believers to touch Christ, to see and know God, to live his life and provide fresh ways of encountering the Lord. Each sacrament involves his effective presence – especially the Eucharist – the sign of the presence of his cosmic body breaking out of time and space, yet offered and available. In pondering the proclaimed word and in opening ourselves to the sacraments we become ever more aware of the thrust of Jesus saying: “It is to your advantage that I go away.” John 16:7. 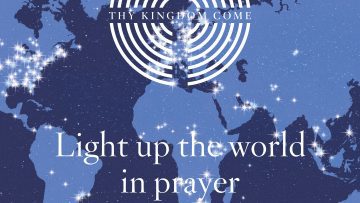 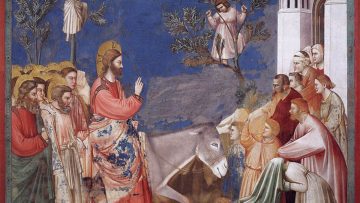 Eastertide Through Art: A Visual Journey

Fleur Dorrell takes us on a visual journey through Eastertide.