Christmas: The Lord who enters his Temple

Why wasn’t Jesus born in the Temple? Fr Michael Hall shows us the expected in the unexpected this Christmas with a richer understanding of the Scriptures, and where God reveals his holiness and glory in a new light. 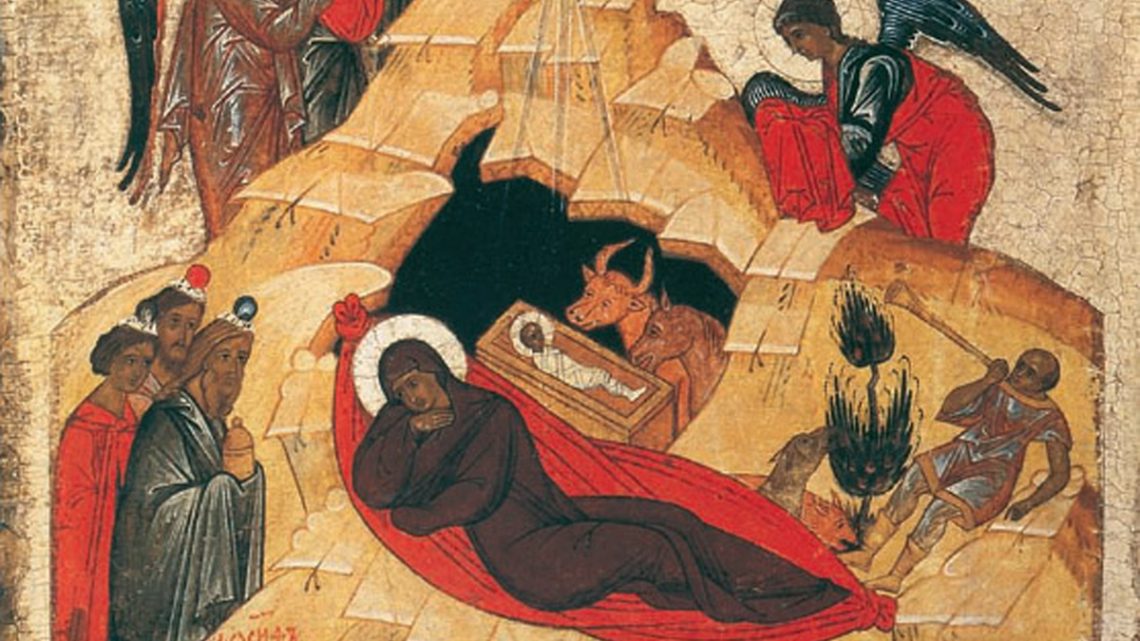 The true origins of the Christmas Story?

Over the years, my own understanding of the New Testament has been enriched by “the fruit of the trees growing by the (Biblical) river” – those writings that came into being in the two or three centuries before Jesus, but did not “make the cut” into the official Old Testament.

Recently that understanding has been further enriched by the work of Margaret Barker, Methodist biblical scholar, who has used these documents and the scriptures themselves to show that a longing for the restoration of the “True Temple” underpins a significant amount of the New Testament.

As she argues in her book “Christmas: The original story” this is even true of the passages about the birth of Our Lord.

Where does our modern understanding of the Christmas Story come from?

St. Matthew and St. Luke are the only gospels with extended “Christmas stories”.  Our mental image of “what Christmas is all about” largely comes from them – though “enriched” and possibly confused by school nativity plays and religious Christmas cards.

St John has no “Christmas story”, but the wonderful theological meditation about the Word of God with which he opens his gospel contains the phrase, “And the Word became flesh and dwelt among us.”  (John 1:14 ESV).  As I observed in one of my previous pieces, the word “dwelt” in Greek actually says “tabernacled”.  He comes to “camp” among us – but more than that.  Even though tabernacle simply means “little tent”, the Tabernacle was the proto-Temple that Moses was instructed to build in the wilderness.  The glory of God would come down and meet with him there.  St John tells us that, at Christmas, God once more enters his Tabernacle, his Temple.

What do we learn from the Gospels about the Christmas Story?

St Luke (as I shall show in a later article) is very conscious of the wider writings that influenced many Jews of Jesus’ time – and also the first Christians.  What if we take a look at his Nativity story to see whether he, too, has the Lord entering his Temple?

All the gospel writers select from the many memories of our Lord’s life, ministry and teaching, choosing those which best fit the aims of their gospel.  St Matthew chooses those “nativity tales” which demonstrate the fulfilment of prophecy.  When St Luke tells the story of Jesus’ birth, he does it in the same way as he will tell the story of his death – focussing on aspects of the “High Priestly” tradition.

The significance of the temple in the Christmas Story.

I would love to discuss Margaret Barker’s argument that the first two chapters of St Luke form an almost liturgical meditation on the Temple – starting with the proclamation of the birth of John the Baptist to his priestly father as he ministers there, and including both our Rosary mysteries of the Presentation and the Finding in the Temple.  She identifies ten pieces of Hebrew poetry in these two chapters – five spoken by angels and five by humans.

In one of those, Gabriel greets Mary and tells her that that her child will be “Son of the Highest”.  Margaret argues that this is the key to understanding the original story of the birth of Jesus.  In the oldest parts of the Old Testament, “Son of God Most High” is applied to YHWH (“the LORD”) himself.  By extension it is then applied to the priest-king after his initiation in the Holiest Place of the temple.

Thus, the child to be born will be God present with his people, the High Priest coming into his temple.

This theme can be elaborated by looking in detail at just one verse from the Christmas story: “And [Mary] gave birth to her firstborn son and wrapped him in swaddling cloths and laid him in a manger, because there was no place for them in the inn”  Luke 2:7 ESV

Margaret Barker comments on four phrases in this verse.

In the days of the original temple, “first born” is the title given to the person who has become the representative presence of the LORD on the earth.  Then, it was the priest-king.  Now it is the “only-begotten of the Father”, Jesus himself.

The clothing of the “new born” priest-king in the days of the First Temple was an important part of his becoming the “first-born son”.   Jewish mystical lore referred to these as “the residual garments”, because they were “emanations of supernal mystery, proceeding from the Glory of the Lord”.

In the Slavonic version of the Enoch literature (“2 Enoch”), coming from around the time of Jesus, Enoch ascends to heaven and becomes the angelic high priest, “clothed in the glory of the Lord” (2 Enoch 22).  The new-born child in Luke is clothed with earthly garments, because the Enoch process has been reversed.  The Glory of the Lord has become incarnate, the face and presence of the Lord for which faithful sons and daughters of Israel had prayed for so long.

Laid in a manger

Margaret says, “The Hebrew word for manger, ‘ebus, is almost the same as the ancient name for Jerusalem, yebus.  So the scene that Luke describes is almost – but not quite – the Virgin who clothes the first-born and sets him in ancient Jerusalem, described in Psalm 2:6, “I have set my king in Zion” This manger/Jerusalem wordplay also occurs at the beginning of the prophecies of Isaiah.

The ox knows its owner, and the donkey its master’s crib,
but Israel does not know, my people do not understand.  Isaiah 1:3 ESV

Any nativity play, any religious Christmas card, any continental presepio, will have the manger surrounded by the ox and the ass.  Neither Luke nor Matthew mention this, but from the earliest days of the Church this Isaiah verse was used as a commentary on the nativity. That whole first chapter of Isaiah is a political condemnation of the princes and priests of Jerusalem, “woven through with wordplay”.

No place in the inn

This phrase has been a source of much comment over the centuries for those who reflect on the nativity story, and what follows is not intended to weaken the impact of the Holy Family’s association with all those in our world today who find “no room at the inn”.

But the words used in the Greek of Luke’s gospel are significant.  There was no room (topos) in the inn (kataluma).

Topos is a very common Greek word meaning “place”.  But in Jewish mystical writing from the centuries either side of our Lord’s birth, it had a much more specific meaning.  The attributes of God were used as circumlocutions to avoid the presumption of talking directly about him.  One very common one was to talk about the “Glory” – shekinah – which came down to inhabit the Holiest Place of the temple (at least in former years).  In a sort of “double circumlocution”, even shekinah  became too holy a word to use.  So mystics would talk about the place – the topos – where the glory of the Lord came to dwell.  As Philo, the first century Jewish mystic, used topos to mean Logos – the Word – this common Greek word might refer to the glory of God present among us.

Kataluma is not a common Greek word.  It is used in Luke chapter 22 for the location of the Last Supper.  But its association here with topos suggests that Luke is pointing us to the Holy of Holies.  Many technical temple terms were not translated from Hebrew into the Greek used in the centuries before Jesus’ birth.  Instead, Greek words were invented that sounded like the Hebrew.  It is possible that kataluma is one of these – a transliteration of taʻalumah – “hidden or secret place”.  What happened to the baby Jesus happened because there was no Glory in the Holiest Place.

“The Firstborn and the Glory, the Logos, was not ‘born’ in the Holy of Holies and did not appear in the garments of Glory in Jerusalem.  He was swaddled in a manger elsewhere – the expected in the unexpected.”

I realise that what I have said has been quite technical, and some might ask, “Why complicate such a beautifully simple story?”  I would return to the image of the river flowing from Ezekiel’s rebuilt temple (Ezekiel 47) – in which a lamb might wade and an elephant might swim.  Yes, there is a beautiful simplicity about the journey of Mary and Joseph to Bethlehem and the events that followed.  But if Luke has selected his narrative to point out to his readers from the very first pages of his gospel that the Lord is coming to reclaim his Temple, is that not also a beautifully simple part of the Christmas story? 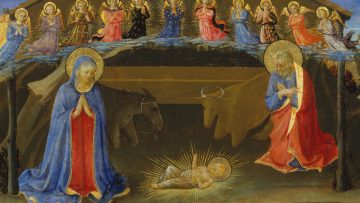 Bishop Peter Brignall reflects on 13 journeys in Luke’s Infancy narrative to help us accompany Jesus in this Christmas season, and to follow the Synod’s listening journey with the Church. 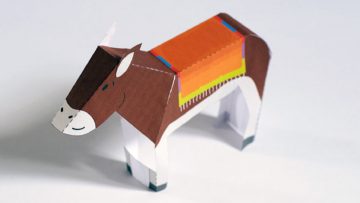 Want a new and interactive way to tell the Christmas story? Download our Christmas Donkey resource for free. 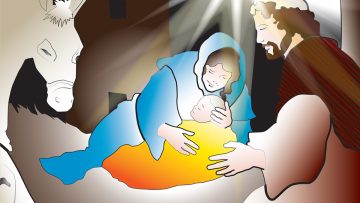 Download our free Christmas story resource designed for children who prefer the Bible in plain English words and pictures. 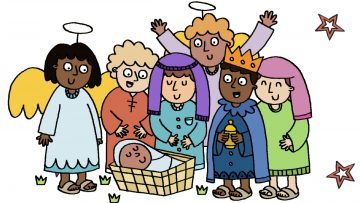 Bishop Peter Brignall invites us to use this short family service for each day of the Octave, beginning on Christmas Eve or Christmas Day with a blessing of the crib. Download the resource for free here.