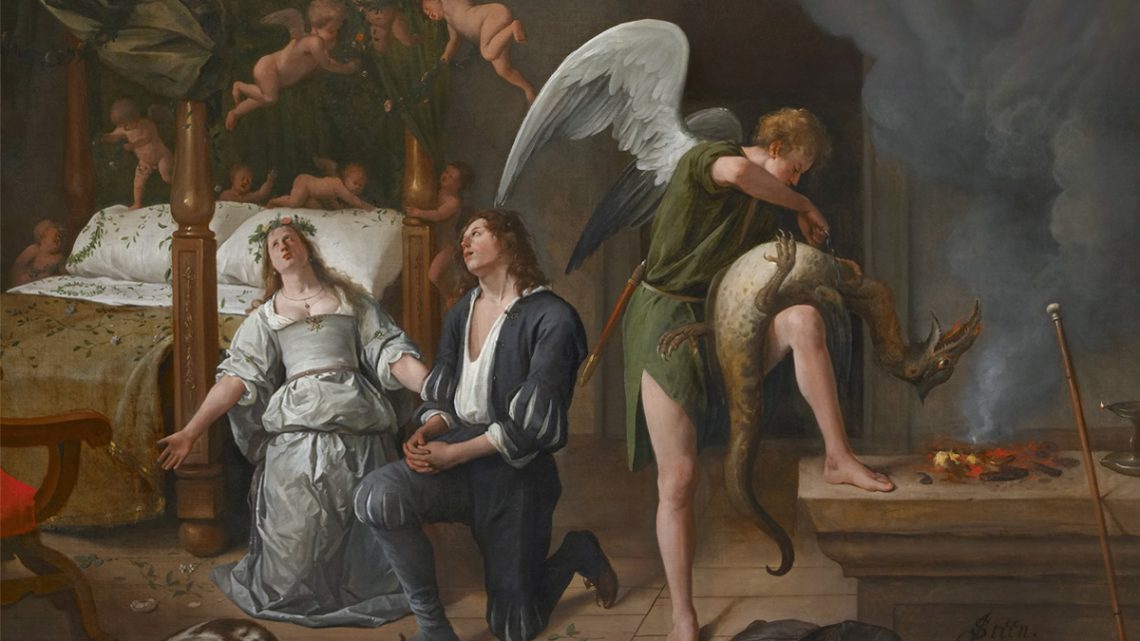 The book of Tobit has attracted a large number of paintings very often focused on Tobias with Raphael, the fish and the dog rather than Sarah – Tobias’ wife to be. This may be because Sarah speaks only in chapter 3 in a heart rending prayer to God, yet her presence is felt hugely since she is central to the plot’s denouement. Of the paintings that include Sarah, they are mostly of the marriage rite or her meeting with Tobias’ parents, Tobit and Anna. However, there are a few dramatic portrayals of the wedding night itself, which we see here created with brilliant effect by the Dutch Golden Age artist, Jan Steen.

The Book of Tobit is a fascinating quest, in 14 chapters, set after the fall of the Kingdom of Israel to the Assyrians in 721 B.C. It tells the story of the pious aged Tobit and how his son, Tobias, with the help of the Archangel Raphael, was able to restore his father’s wealth and health. The Archangel Raphael, in disguise from Tobias and his family until right at the end, leads Tobias to his relative, Raguel’s home where restoration of family, income, eyesight and relationships can be fulfilled. Raguel gives his daughter Sarah in marriage to Tobias but warns him that seven previous husbands had all been devoured by the demon Asmodeus on the wedding night. And so he has already dug a grave for Tobias! Raphael advises Tobias to prepare a potion that smells so bad that the demon will be driven away, and then their marriage can be successfully consummated and the family line preserved.

This scene with its superb theatrics takes up the portrayal of God-centered marriage through Tobias’ prayer with Sarah on their knees while Raphael gets busy binding the demon in chains. The potion is made – this is drama at its best as we watch the charcoal fumes repelling the demon beside the couple invoking the Lord’s protection. Many Catholics include Tobit and Sarah’s prayer below in their wedding Mass:

4 When the parents had gone out and shut the door of the room, Tobias got out of bed and said to Sarah, “Sister, get up, and let us pray and implore our Lord that he grant us mercy and safety.” 5 So she got up, and they began to pray and implore that they might be kept safe. Tobias began by saying,

“Blessed are you, O God of our ancestors,
and blessed is your name in all generations forever.
Let the heavens and the whole creation bless you forever.
6 You made Adam, and for him you made his wife Eve
as a helper and support.
From the two of them the human race has sprung.
You said, ‘It is not good that the man should be alone;
let us make a helper for him like himself.’
7 I now am taking this kinswoman of mine,
not because of lust,
but with sincerity.
Grant that she and I may find mercy
and that we may grow old together.”

Raphael’s wings are almost hitting Tobias as he prays while cherubs scatter flowers around the marital bed. This has to be one of the most alternative wedding nights in both the Bible and on the canvas! Steen is unique among leading 17th-century Dutch painters for his humour; he has often been compared with his contemporary French playwright Molière, as both men treated life as a comedy of manners. Here we see a number of incidents happening in the one setting which draws our eyes back and forth to keep up with the action and the plot. The only element of calm is the dog curled in front of the newly-weds while their fate hangs in the balance: there is no time to waste in this most dangerous bedroom. Yet the dog who belonged to Tobias and accompanied him and Raphael on their long journey is exhausted and desperate for sleep. Dogs in art symbolise marital love and fidelity unlike cats who represent lust and betrayal.

To say that Tobias is anxious here having discovered what happened to Sarah’s seven previous husbands is an understatement; and this mottled dragon-type demon doesn’t look too tame! Sarah appears neither happy nor convinced which is entirely understandable since how many times can you marry the wrong man? This is her last resort. Although we can’t see them, servants hover outside and what a report they will later bring to Sarah’s father. Raphael, on the other hand, appears totally in control. He’s oddly barefoot for such an encounter but undeterred by the mission in front of him. His green robe matching the demon’s skin can hardly protect him yet with his body he inverts the demon’s back, and his left knee inverts the demon’s left knee, creating a counterbalance of form and shape. Our eyes follow Raphael’s hands as they close in to fasten the chain around the demon’s neck while its vicious claws splay open as it writhes and struggles.

From this episode onwards, Raphael uncovers his disguise, Sarah goes on to bear seven sons, and the demon mercifully never returns. Tobit’s eyes are restored to sight, his money recovered and the family line preserved.

Sarah’s story is surprisingly modern. We are still living in a society where the pressure to get married and have a family is very dominant. In this painting where against all the odds and against all previous experience, love is sincere and unconditional, and is placed entirely in the hands of God and his archangel, we witness selfless love, the honouring of the family and an example of trusting in God even when life isn’t worth living anymore. Jan Steen excels at combining Biblical stories with domestic settings, presenting us with the essence of the narrative using a subtle palette to humorous effect. God and man, demon and angel, collide in this weird and wonderful wedding night.

Interesting facts:
This painting was originally cut in two and only rejoined in 1996. It is missing some drapery on the left side and is smaller from being cropped. Jan Steen painted two more events from the Book of Tobit – the marriage contract and the wedding day.

We have readings from Tobit in June; Week 9 of our Year 1 lectionary cycle. It is not considered part of the main Canon of books in the Protestant churches or in the Jewish Scriptures as it is regarded as apocryphal. It was probably written in Aramaic, appears in the Dead Sea Scrolls but has controverted origins of place, date and authorship. 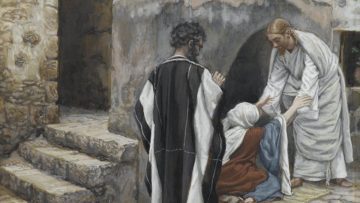 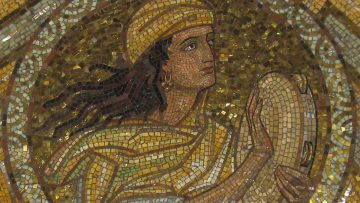 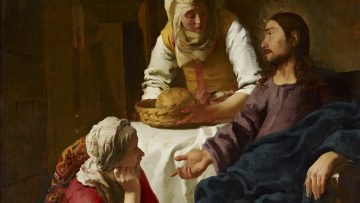 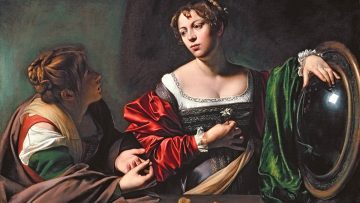