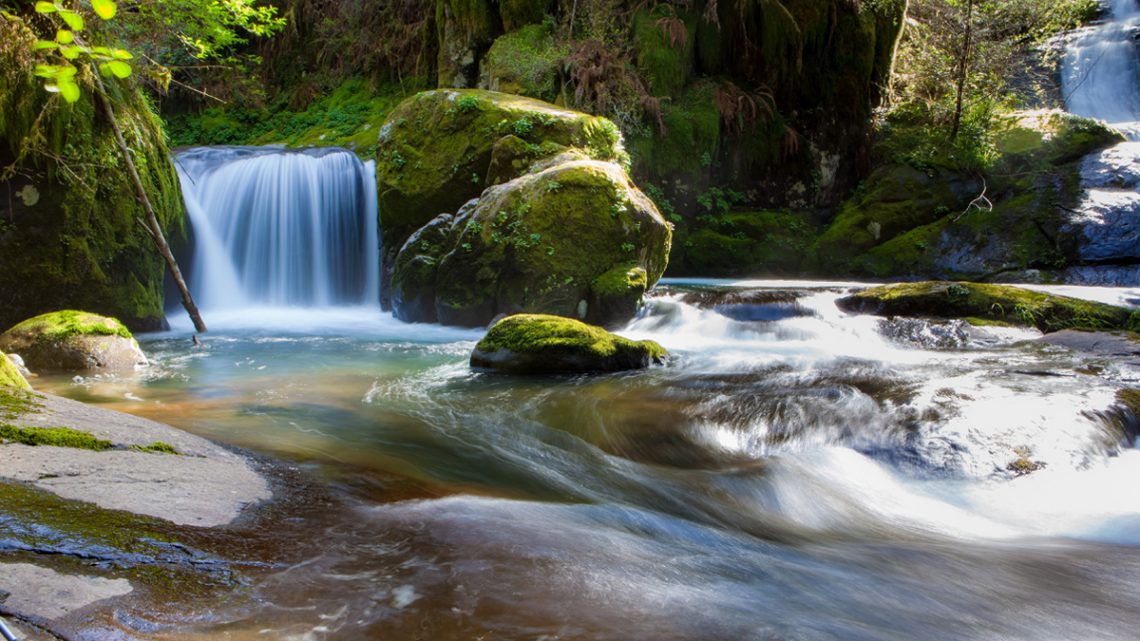  icon-home » About the Bible » Going Deeper » Between the Testaments » A river runs through it: waters of ...

As we read in the final chapter of his great prophetic work, Ezekiel sees water flowing from the gate of the restored Temple (Ezekiel 47).  I used this image at the beginning of my series “Between the Testaments” to represent the Old Testament Scriptures, with the trees of the extra-biblical literature growing on its banks. In this article, which continues to look at Temple themes in St John’s Gospel, I want to use Ezekiel’s vision in a more literal way.

In my last article, which drew heavily on the work of the Scripture scholar Margaret Barker, I introduced the idea that in St John’s Gospel we see the clash between the theology and spirituality of the “First Temple”, built by Solomon and based on the presence of God in the priest-king, and that of the Second Temple, reformed by King Josiah and rebuilt after the Babylonian Exile.  The first, full of Wisdom, is open to the nations.  The second, built around the Law, is “pure and separate”.

There are so many instances of this clash in St John’s Gospel that the danger for me was that I would have to perform a complicated and unsatisfactory abbreviation of Margaret Barker’s wonderful book “King of the Jews”, which examines these themes in a technical but readable way.

Instead, I am going to “follow the water”.  It is thought that in the First Temple there actually was a stream which flowed from the Holiest Place in the centre of the Temple, down to the pool of Siloam. For Ezekiel, the river flowing from the Temple was a sign that the glory of the Lord had come once more to fill that Holiest Place.

As with the other Gospels, St John tells us about the baptism of Jesus, though at second hand through the words of John the Baptist.  He speaks of how he had seen the Spirit resting on Jesus when he came out of the water (John 1:33), and realised that this man must be both “the Lamb of God who takes away the sins of the world” and also the “Son of God”.  We saw last time, in Nathanael’s encounter with Jesus that “Son of God” was a royal title.  So too here:  in First Temple theology the one who bears the sins of the world, at the Day of Atonement, was the royal high priest.  He is the “Lamb”, not because a lamb was sacrificed in atonement (it was two goats), but because of the prophecy in Isaiah 53 likening God’s Servant to a lamb.  (In Aramaic, the word ţalyā can mean both servant and lamb).

The next time we meet water it is at the wedding feast at Cana, where Jesus “lets his glory be seen” for the first time (John 2:11).  This verse is in itself significant, because it was on the Feast of Tabernacles when Solomon dedicated his Temple and the Lord’s glory came to fill the Holiest Place.  It was at Tabernacles that the priest-king would enter beyond the veil, and himself encounter the Glorious Presence.

“Turning water into wine,” comments Margaret Barker, “was not a sign of the Messiah, although people hoped that the Messiah would bring abundant crops, and so plenty of everything.  Offering wine instead of water was a sign of Melchizedek.” (King of the Jews p.188)  This highly significant Old Testament figure (even if he is only mentioned in three verses in Genesis 18) is a priest of “God Most High” who brings out bread and wine (instead of the customary water) to Abram, and then blesses him.  Along with Enoch, he is seen as part of the priestly tradition that would find its expression in the worship of the patriarchs and in the priest-kings of the First Temple.

Many Israelites (especially those who looked for the restoration of the First Temple) expected Melchizedek to return “in the first seven years of the tenth jubilee” – roughly 19-26 AD.  Margaret Barker uses the Qumran text devoted to Melchizedek to show that in fact all the gospels open with Jesus doing things that Melchizedek was expected to do: proclaiming that the time was fulfilled; calling people to repent; fulfilling the classic prophecy of Isaiah 61 – and turning water into wine.

John then goes on to show Jesus’ encounter with three representative figures:

Jesus tells Nicodemus that he must be born again – or “born from above” – by water and the Spirit before he can see the kingdom of God.  This “birth from above” is what the priest-king experienced in the First Temple.  Perhaps shockingly, Jesus is saying that the Spirit – “who blows where she* wills” – can bring this rebirth to all who believe and are baptised.
(*she:  In Greek, the word for Spirit is a neuter noun, and should take the pronoun “it”.  However in Hebrew, Spirit is a feminine noun, and should take “she”.  Because in First Temple theology there is such an identification between the Spirit and the figure of Wisdom – also feminine – I hope readers will not think that I am being provocative if I follow the Hebrew custom.)

In contrast to the highly educated Nicodemus, it is actually the Samaritan woman who realises what it is that Jesus has to offer – the living water that quenches every thirst.  As we have seen (Ezekiel 47 and also Zechariah 14:8) living water was expected to flow from the restored temple as a sign that Wisdom, glory and Spirit had been restored.  “Sir, give me this water,” says the woman.  (John 4:15)

On the face of it, the paralysed man by the Pool of Siloam is just another opportunity for Jesus to “let his glory be seen”.  But there is more.  In the Book of Numbers we read of the death of Miriam, Moses’ sister (who represented the figure of Wisdom in the First Temple).  Following the death of Miriam, “there was no more water for Israel” apart from that which Moses drew from the rock”.  It would be 38 years before the Israelites would find a flowing stream – the number of years that the man had been paralysed / dried up.

The prophet Jeremiah sees a similar “drying up” when Josiah reformed the Temple.  “My people have committed two evils: they have forsaken me, the fountain of living waters, and hewed out cisterns for themselves, broken cisterns that can hold no water.”

So here is the man waiting to be immersed in the pool – in Hebrew miqveh.  But in the word-play beloved of the Hebrew prophets, miqveh could also mean hope.  In healing the man, Jesus shows himself to be not only the hope of Israel, but also the fountain of living water (compare Jeremiah 17:13-14).

John the Evangelist returns to this theme in chapter 7, when Jesus goes, in secret, to the Temple for the Feast of Tabernacles.  On the last and “Great Day” of the feast, there would be two processions – the first with the priests and people carrying branches up to the Temple proclaiming the Lord and asking him to save; the second carrying a sacred pitcher of water from the Pool of Siloam up to the altar, where it would be poured out, flowing down the steps in imitation of the sacred stream that once flowed from the Holiest Place.  At that very moment Jesus cries out, “Let anyone who is thirsty come to me, and let the one who believes in me drink.  As the scripture has said, ‘Out of the believer’s heart shall flow rivers of living water.’  Now he said this about the Spirit.” (John 7:37-39)

Not only is Jesus proclaiming himself to be the true, renewed, Temple but he is making the (shocking?) statement that those who believe and follow him will also be “True Temple”, inhabited by the glory and the Spirit of God, issuing life-giving water from their heart (or even “bellies”).

There are just two more references to water in John’s Gospel.  The first is at the Last Supper, where, alone of all the evangelists, he tells us that Jesus washed his disciples’ feet (John 13).  Once again this shows him to be the “Servant King”.

The last is when Jesus’ side is pierced on the cross, and “out flowed blood and water” (John 19:34-37).  John sees this as the fulfilment of a prophecy of Zechariah (12:10) that “they shall look on those whom they have pierced”.  What his readers would have known, but we might miss, would be that the prophecy continues, “On that day a fountain shall be opened for the house of David and the inhabitants of Jerusalem, to cleanse them from sin and impurity.” (Zechariah 13.1)

While this is the last time we meet water in St John’s Gospel, it is not the end of the story.  There is scholarly argument about whether the “John” associated with the Fourth Gospel is also the “John” who has heavenly visions in the book of the Apocalypse – the last book of the New Testament.  We’ll be taking a close look at this book later in this series, but for now, just remember how that book closes, and reflect on its significance to this Gospel and the restoration of the true temple:

Then the angel showed me the river of the water of life, bright as crystal, flowing from the throne of God and of the Lamb through the middle of the street of the city. On either side of the river is the tree of life with its twelve kinds of fruit, producing its fruit each month; and the leaves of the tree are for the healing of the nations. Nothing accursed will be found there any more. But the throne of God and of the Lamb will be in it, and his servants will worship him; they will see his face, and his name will be on their foreheads.
(Revelation 22:1-4, NRSV) 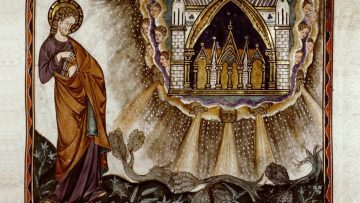 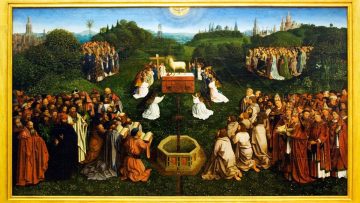 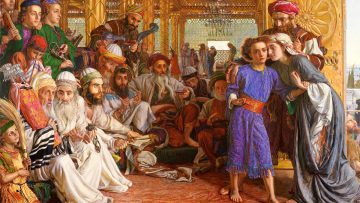 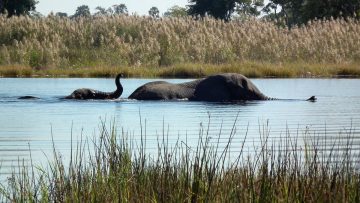