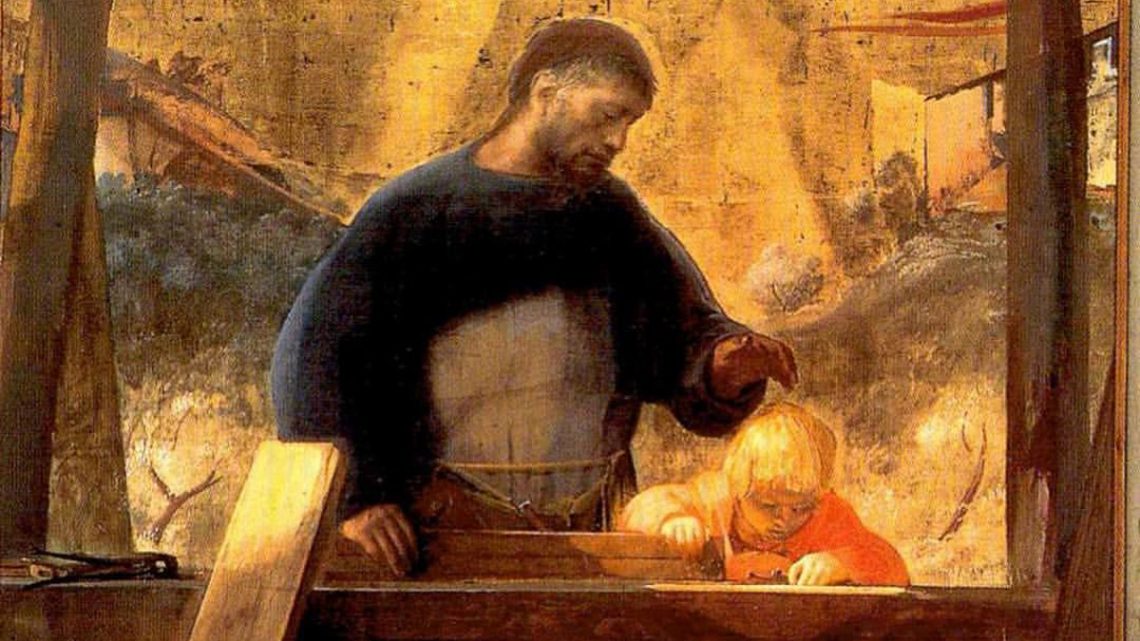 Prayer to St Joseph by Pope Francis in this special year of St Joseph.

Hail, Guardian of the Redeemer,
Spouse of the Blessed Virgin Mary.
To you God entrusted his only Son;
in you Mary placed her trust;
with you Christ became man.
Blessed Joseph, to us too,
show yourself a father
and guide us in the path of life.
Obtain for us grace, mercy, and courage,
and defend us from every evil.
Amen.

Today St Joseph is venerated as the patron saint of workers, pilgrims, fathers, and carpenters. Yet we know very little about him since the Bible has so few references to his character and life. This seems remarkable given his role in Jesus’ birth and early years. If Joseph is Jesus’ human father, why is he not mentioned in the gospels of Mark and John? Luke mentions him by name only in the genealogy of Jesus and once in the narrative of Jesus’ birth. Therefore, most of our ideas about Joseph come from Matthew’s Gospel, the 2nd-century Protoevangelium of James and the Golden Legend by Jacobus de Voragine.

How Joseph and Mary came to be betrothed in the first place is described in the Proto-evangelium. An angel tells the priests to call all the widowers to come to the Temple with their rods; God will provide a sign to show which widower should be betrothed to Mary. Joseph is chosen because a dove flies out of his rod. In the Golden Legend, a flower grows out of the rod before the dove alights upon it. This symbol recalls the imagery of the flowering staff of Aaron showing he had been chosen by God in Numbers 17:23, and the Jesse rod in Isaiah 11:1-2. The episode of the rods and the marriage are painted by Giotto in his Scrovegni Chapel frescoes below.

The Marriage itself of the Virgin Mary while painted often in Christian art, is not mentioned in the four gospels but again, is covered in several apocryphal sources and in later redactions, notably the 14th century compilation of saints – The Golden Legend. Unlike other scenes in the ‘Life of the Virgin cycles’ (such as the ‘Nativity of Mary’ and the ‘Presentation of Mary in the Temple’ by her assumed parents Anna and Joachim), Mary’s marriage to Joseph is not currently a feast in our church’s calendar.

Nevertheless, in art, Mary’s wedding could be included in several different religious scenes and while wedding processions were portrayed in the Early Medieval period onwards, in fact, neither the Golden Legend nor any of the early apocryphal accounts describe the actual ceremony itself. These sources also differ as to its timing, other than that it preceded the ‘Journey to Bethlehem’. It is therefore, unclear whether this story came before or after the Annunciation which, in the New Testament account, occurred after their betrothal but before their marriage.

In another chapter of the Protoevangelium, is a detailed account of what has been called ‘St. Joseph’s Trouble’ – the dilemma he faces when he finds that Mary is with child, is recorded as a further dilemma when the High Priest, seeing Mary pregnant, immediately accuses the two of them. When they rightly protest, he tests them by making them drink ‘the water of the ordeal of the Lord’ which if they are not innocent, will make them ill to expose their ‘deception’. When it fails to do so, he dismisses them. This ‘water test’ is the subject of a few rare images in early and medieval Christian art.

Although St Joseph is pictured in numerous images related to the birth of Jesus, in all these types and scenes, he only appears because he is in the story – more as a film extra than as a significant person in his own right. It was rare for medieval art to portray him separately or among any of the other saints. However, this attitude starts to change radically in the mid-15th century, when we see him sitting warming himself by a fire in one Italian ‘Annunciation’ and working as a carpenter in the wonderful Robert Campin Netherlandish ‘Annunciation’.

Here the Virgin is portrayed in a setting of bourgeois European realism, radical in a painting of this time as the scene had always been depicted in or next to a church. The Virgin is seated in front of a low bench or pew on the tiled floor, a curiously uncomfortable sign of her humility. Mary is reading a book, and a second one lies on the table. Among the many symbols and features of this painting we see that in the right hand panel, Joseph is at work in his carpentry shed. He is busy making a wooden mousetrap as a symbol of catching the devil through Jesus’ birth.

Quite early in the 16th century, paintings of the Holy Family all seen together became very popular and helped Catholics align their own family needs and intercessions with that of the most important Biblical family model. In the same century, St Teresa of Avila began to promote devotion to St Joseph, and she made him the patron of her reformed Carmelite convent; you will sometimes see her portrayed with him as part of this patronage.

Since the 17th century, the most enduring image of St Joseph has been as a carpenter, perhaps in some ways, influenced and associated with the rise of the Industrial Revolution and Catholic Social teaching documents on the dignity and rights of workers. So we now celebrate two feast days for Joseph:

19th March has been the most commonly celebrated feast day for St Joseph instituted by Pope Sixtus IV in 1479 but it wasn’t until 1955 that Pope Pius XII established the Feast of ‘St Joseph the Worker’ on 1st May. This is also May Day (International Workers’ Day) and believed to reflect Joseph’s status as the patron saint of workers.

What is interesting from the 17th century onwards, is that Joseph is no longer portrayed as an old man with a beard, asleep, dreaming or in the background only as guardian or protector, but is now painted as youthful, vigorous and very practical. Joseph is called a tekton in the gospels, which is usually translated from the Greek as carpenter but more likely was a general craftsman. What a wonderful father and multi-tasker.

Joseph is painted on his own, centre stage at last, combining humility and honour with highly skilled credentials that speak loudly to the modern age. Around him are a selection of tools and work in progress. Sometime the boy Jesus is with him, being shown the ropes; sometimes, Joseph is with fellow workers, but very often he is on his own, busy working in the service of God.

Here we see a series of wonderful linocuts illustrating this new interpretation of Joseph by Ade Bethune (1914 – 2002) who was an American Catholic liturgical artist. She was associated with the Catholic Worker Movement, and was a designer and iconographer.

At a time of pandemic when mass unemployment and poverty have created new challenges to our very existence, many issues regarding how and when we work, fair pay, guaranteed labour and managing the rising global debt, couldn’t be more relevant to the future of our economies and our children’s survival. In this climate, Joseph is an invaluable saint.

Joseph’s death is not mentioned in the Bible, but because he was traditionally believed to be much older than Mary, it was assumed that he died before Jesus began his adult ministry. This might explain why Joseph isn’t mentioned with Mary at Jesus’ crucifixion, when Jesus gives Mary to John the Beloved disciple to be cared for after he has died. Joseph’s death is pictured frequently with Jesus and Mary lovingly attending him in his last hour and this gave rise to the belief that he had a happy death.

Joseph is a central figure in the Nativity story. Here is a model of someone who represents all the virtues in the Hebrew Bible, above all trust in God and loyalty in love. He is asked to do something scandalous while remaining innocent, and because he’s righteous, he follows God’s guidance. Not only is it highly dangerous when Jesus is born, when the holy family flees from King Herod, Joseph is again responsible for protecting Mary and her son against the odds. By taking his family into Egypt, from the very people who had oppressed the Israelites for so long, is not exactly the ideal journey for a Jewish family to make. It flies in the face of their very history. Yet here is Joseph believing that God will show him the way, he’s shown him before so there is no reason for Joseph to doubt God this time round either. 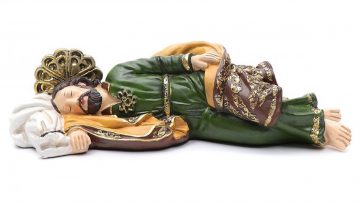 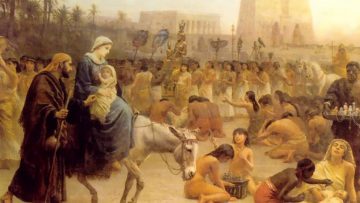 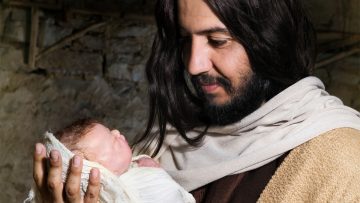